If you’ve not visited the Crazy Egg blog recently (and why would you have?), you may be surprised to learn that it’s now something of a Wirecutter wannabe.

As of August 25 2020, the Crazy Egg blog made a rapid change in direction. Before then, blog posts were about topics you’d expect to find on the blog of a heatmap tool company, like “how to understand heatmaps” or “how to optimize your website”.

This is not top-of-the-funnel marketing, like you might expect from Hubspot. It’s a full-fledged affiliate marketing play.

So what’s going on here?

As I’m sure you’re aware, Crazy Egg is just one part of Neil Patel’s online empire. And I doubt it’s a big slice.

According to BuiltWith, Crazy Egg’s growth peaked way back around 2014, and it’s been on a steady decline ever since.

That’s while competitors have been steadily growing. Hotjar, for example, is now used on almost 6x more websites than Crazy Egg.

In a testament to the company’s standards, Crazy Egg, in a blog post on the “best heatmaps for WordPress”, both falsely claims to be “the world’s most popular heatmap tool”, and erases actual market leader Hotjar and its official WordPress plugin from the narrative, despite the tool being used on almost 800,000 live website according to BuiltWith, and at least 50,000 WordPress sites, according to WordPress.

Never one to miss an opportunity, it appears as if Neil decided to pivot Crazy Egg’s blog into an affiliate marketing machine to make up for the decline in popularity of his own software.

Maybe it’s partly down to Covid causing a downturn in other areas of the business, maybe the rise in online work makes this the perfect time to promote related software.

Hell, it’s a lot easier to become an affiliate than it is to create and market 100 new software products.

Whatever the reason, and despite it looking spammy as hell, I bet it’s going to pay off very soon.

By whatever metric you look at, the CrazyEgg.com domain is mega powerful.

According to ahrefs, Crazy Egg has over 31,000 referring domains, with 87% dofollow links. Compare that to any niche affiliate blog, and they’re already miles ahead.

And it’s not just generic authority, like you might find on a domain like Forbes or NYMag – most of Crazy Egg’s links and anchors relate to the website/software niche.

What keywords are they focusing on?

Here’s a table of all the main affiliate keywords that Crazy Egg are currently trying to rank for, along with the estimated monthly US search volume.

I filtered out keywords that didn’t include “best” in them, like “how to start a website”, although of course these will also be very lucrative if/when they rank.

Take the keyword “best business credit card” in the US, for example.

Competition is high, with WalletHub.com and NerdWallet.com ranking top 2.

But you don’t have to look too far to see Crazy Egg, already ranking at position 20, less than 10 days after the article was published.

And let’s not forget that credit cards is a) a super competitive affiliate niche, and b) not where Crazy Egg’s domain authority lies.

If we look at another highly competitive keyword that’s more in line with Crazy Egg’s existing niche authority, like “best website builders”, they’re already at position 12.

How much money will they make?

Based on the stats in the above table, even if we ignore longtail kws, ignore non-US traffic, and assume they only rank top 10, and only get $10 commissions for 1% of the readership, these posts are still going to make thousands of dollars very quickly.

In reality, affiliate commission on software and digital services is pretty high.

The first credit card Crazy Egg recommends in its “best business credit card” post is going to earn them up to $100 per sign-up. That’s going to add up fast.

The writing is poor, with errors, and a lot of waffle to hit a word count. Nobody appears to have purchased or tested any of the software or services discussed. It’s standard “here’s a low-quality summary of the sales page” fare.

Here’s an extract so you can see what I mean. This was taken from a piece about the “best business insurance”:

Your industry and what you do as a business are important factors to consider. Different industries have different associated risks and various legal requirements, as well.

Not exactly full of insight.

Neil Patel already has a less-than-sparkling reputation as far as his marketing peers are concerned, so his foray into low-quality affiliate marketing is unlikely to surprise anyone.

Also, what’s with the authorship? In an era of Google EAT, Crazy Egg has decided to have all of its new affiliate posts authored by the mysterious “Today’s Eggspert”.

There’s no link to a bio or clue about who that non-expert may be.

I think it’s clear to anyone who’s been doing SEO or affiliate marketing for a while that Crazy Egg’s affiliate content is written by a basic, cheap writing service.

Let’s see how they rank

At the time of writing this, most of Crazy Egg’s affiliate posts have only been live for just over a week, so it’s too early to see if this new experiment has been successful.

I’ll be keeping an eye on the SERPs and will post an update if/when things start to get moving.

Thanks to Mahesh Mohan via Twitter, for spotting that Neil Patel is also pivoting his personal blog, NeilPatel.com into an affiliate marketing site.

On the back of that, I also saw the same thing happening on the QuickSprout blog (co-founded by Neil). 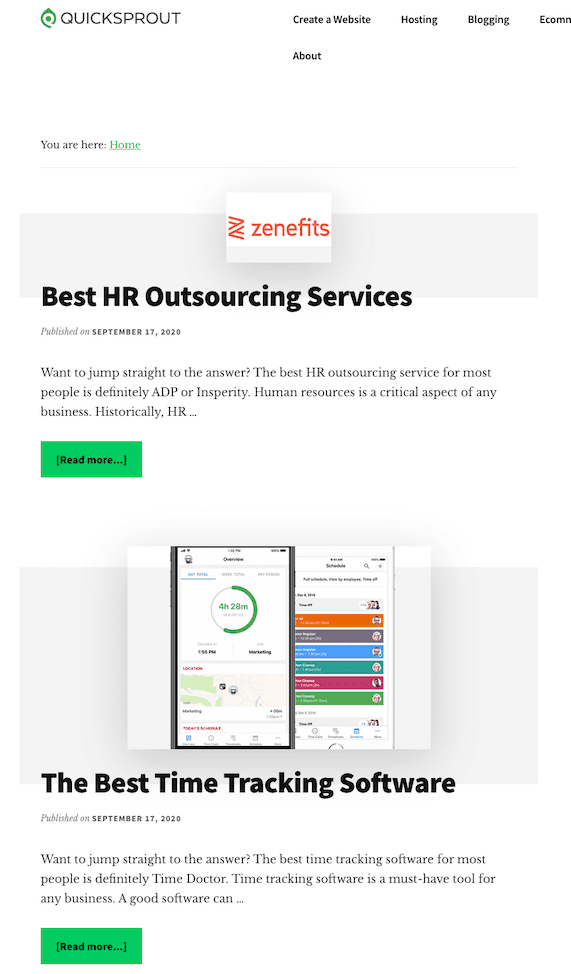 Will be interesting to see what kind of linking Neil does between these sites, and whether they’re targeting the same keywords in order to dominate SERPs (now that Google only allows 2 results per domain).

If you’ve noticed any other affiliate blog pivots, or have thoughts on Crazy Egg’s new direction, tweet at me @tomtheseoguy.